CWG: How to throw out an asset


Its been a bit since my last post, no excuses I just have been working.

While keeping my mind on the Cows With Guns project I worked and toiled away finishing up the last enemy in the spawn sequence.  The Sumo sheep!

He was pretty cool, did what the other sheep didn't and ran across the field to attack you, and he ate up all your shots!  Coming only once every hundred spawn waves was good too, so I treated him like a mini-boss of sorts. 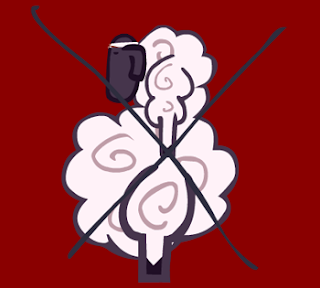 Damn if he didn't make my cut about a month ago...  I sketched this mofo at least a dozen times, animated him once even and when I really started to think about it, the Sumo just didn't match the purpose, or even the ridiculous theme I was going for.  Something needed to be done immediately... 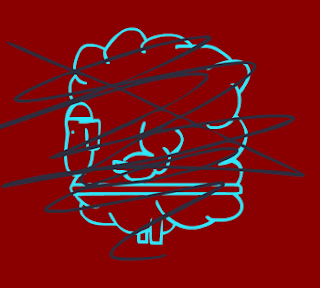 I tried to redesign him a couple times each got worse and worse.

At this point I just threw him out and built up a guideline of what purpose I wanted him to serve.  It was pretty infuriating but the new result came out much better than I anticipated.

When I realized I was aiming to make a mini-boss I decided he needed to guide the player into the boss fight in at least one way.  Thus he is now the enemy who teaches you about telegraphed attacks (A small animation before a strike to help identify patterns.  ex. You pulling your arm back to punch someone is a telegraph).  So I needed him to have a ranged attack he could telegraph, how about another big machine gun!  Only one isn't good enough anyways!  So I started to draw up some ideas and the Rambo sheep was born! 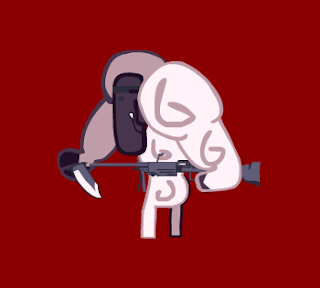 This is only a WIP at the moment but I am excited to finish him up and get him animated.  Being way more readable and goofy (Muscle sheep with a grudge and a big fucking knife!) he ties in with everything I want him to do for the player.

Email ThisBlogThis!Share to TwitterShare to FacebookShare to Pinterest
at 4:22 PM

Aaron "Angelbait" Fossett
Making good games is my passion, and although it has taken me awhile to get to it, I am charging full-forward none the less!

Liking the look of CWG?